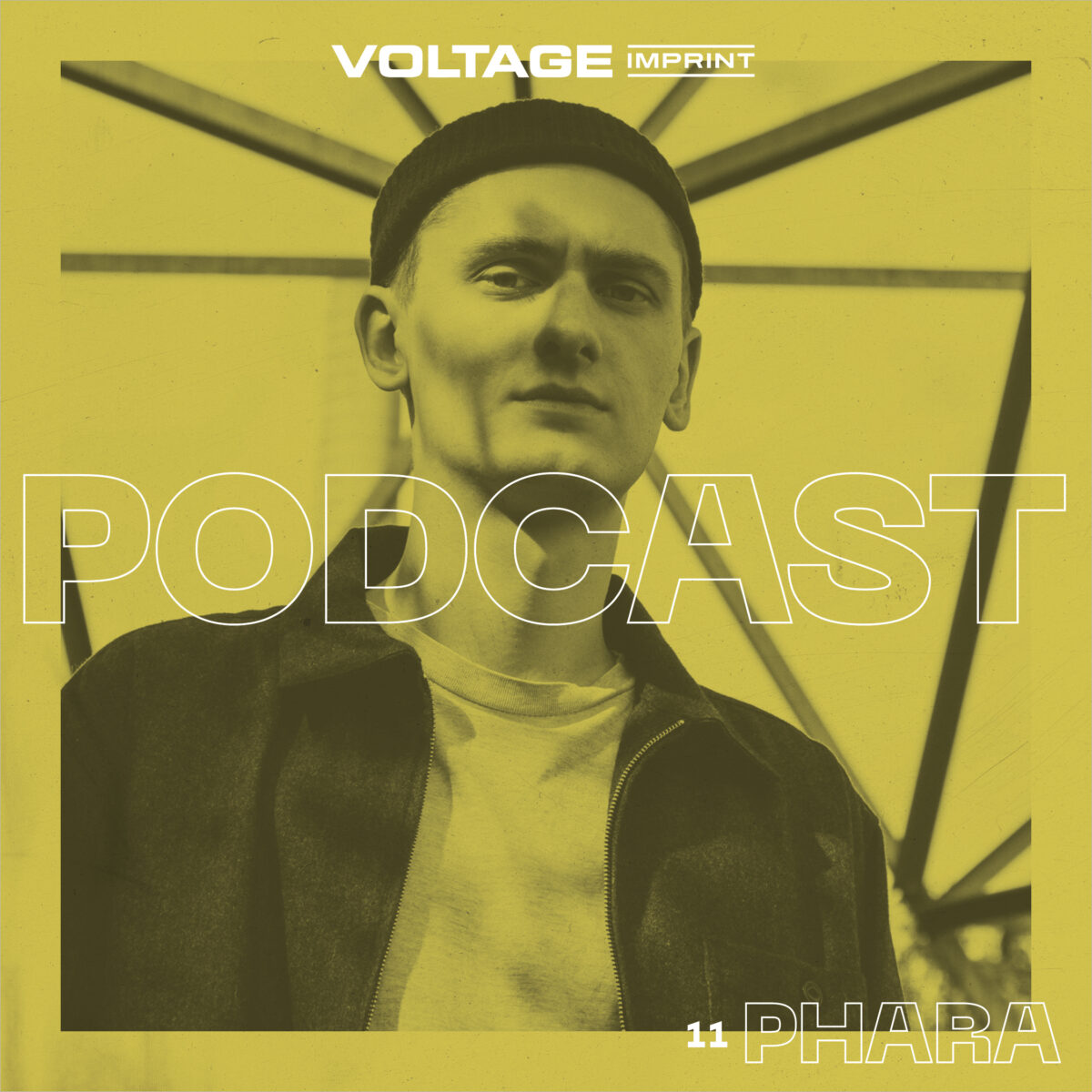 DJ and producer Phara is one of the young artists at the forefront of the Belgian techno scene. His music, rich in influences, draws upon a raw warehouse atmosphere mixed with 90s vibes to create a true industrial chaos.

Born and raised in Belgium, his passion for music started at an early age with drums, evolving into a love for electronic music and especially for techno. The artist already has a wide list of releases on Soma, VOLTAGE Imprint, SK_Eleven Ear To Ground, and more.

Phara is one of our VOLTAGE Agency protégés, and recently offered us an amazing show for our VOLTAGE stream series. We are delighted to welcome one of his performances again, this time for the 11th episode of our podcast series.

Can you tell us a little bit about your selection for this podcast? What emotions/energy/story did you want to convey with this set?

I try to keep every mix I do as spontaneous as possible by picking a bunch of records I like and by mixing them on the spot. For a lot of people preparation is key, but I noticed in the past that when I prepare too much, the pleasure in DJ’ing gradually decreases.

The selection of tracks in this podcast Is a mix between some new records I bought during this strange year as well as some unreleased stuff of my own and as always, some old records I found..

In the mix, is there a track that stands out to you in particular? Could you give us some background on it?

The track that stands out most for me is Thanos’ new release on his own imprint Thar Hallow. Thanos works for Triple Vision and I’ve been in contact with him ever since I released my first EP on Planet Rhythm. We were always big fans of each other’s work.

He contacted me again for my next EP which he loved and sent me a test pressing of his next release on his label. The entire EP is killer. Repetitive, groovey as hell and playful on drums. An instant buy for everyone who’s into 90’s groovers.

Your musical journey started by playing the drums, before embracing your current love for techno. In an interview to Novafuture, you mentioned that a lot of electronic music artists also share this background of initially being drummers/percussionists. How would you explain this path? What does your drums formation bring to your productions?

If my percussion teacher would hear what I do now, I think he would roll his eyes and walk away haha. My drum sequences aren’t as complex as other techno producers’ tracks. They’re very repetitive without too much variation, but for me, the appealing thing about techno was the groove, the roll and the drums playing a big part in the aesthetic of a track. Right before I got into techno I was making house music, which focuses more on the melodic part. Something I do miss in my own productions nowadays. Since lockdown I have been working on some more melodic stuff as well which still can be categorised as techno.

As a DJ, you prefer playing records instead of CDJs. Could you explain the thinking behind this vinyl-only mentality - what is so special about spinning physical records?

When I started DJ’ing around the age of 15 I immediately bought two technics record players and a crappy mixer. Since then I’ve always been buying my favorite records of any genre on vinyl.

There is just something about digging crates for hours and discovering new music instead of sitting behind your computer screen to see the same records pop up everywhere. 90’s DJ’s will say I’m too old fashioned and younger ones think it’s cool I believe?
The smell, feeling and emotion a record brings is so much more valuable than a digital file on a USB stick. It’s a tangible product where lots of people put a lot of effort in. Think about it when you put the needle on the next record you play.

You have not only been producing under the alias ‘Phara’, but also ‘Robert D’ and ‘Shin’. Why the need for three separate projects, and what differentiates them?

I’ve always been a big fan of artists who try to show themselves from another perspective. Limiting yourself to one genre would become boring, even despite the fact that it’s been a while since I did something different.

Not really using these alter ego’s as a reference today because those were the early days. I’ve come a long way in knowledge and practice when I look back at these EP’s, but nonetheless I can be quite happy with them.

Now that COVID-19 regulations are starting to loosen, and even though there will still be some time before clubs re-open completely, what club/venue do you look the most forward to play a gig at?

Voltage, without any doubt. I’ve missed that place, the crowd and energy so much during this pandemic, but was privileged to walk around the venue again for the amazing livestream last winter. I almost forgot the very peculiar smell of that old warehouse.

Like many dj’s, I can’t wait to see all those familiar faces at the festival again and to tear down the place at my set in August.

During the pandemic, I made lots and lots of music. I’ve never looked for a certain sound, but always thought I didn’t really have one. By buying the Korg Electribe again after I said goodbye to it years ago, I instantly made 15 tracks with a very special character.

After making a thorough selection, I decided to release some tracks on my very own new label, “Phaaar”, which will be launched in September/October.

Next up: Nene H