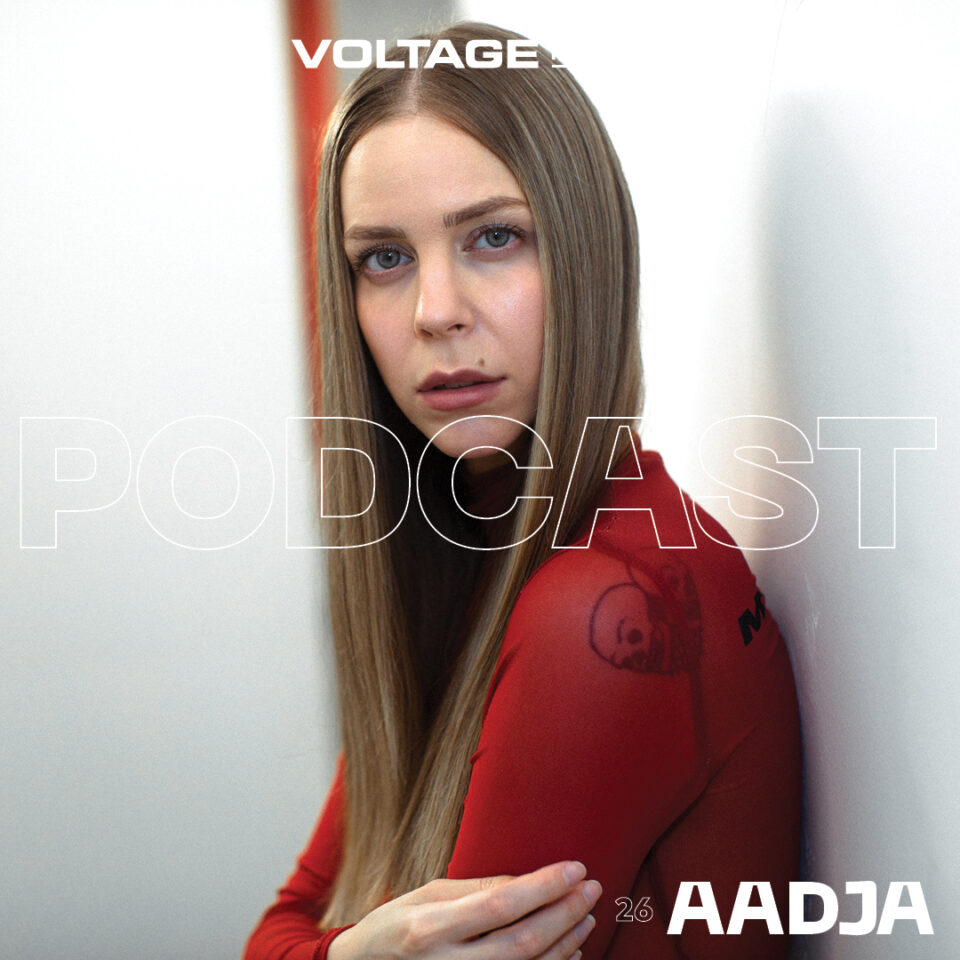 Originally from Conception Bay South on the far east coast of Canada, Hilary Jean moved to Toronto to further herself in music and found herself organising DIY warehouse raves as a part of the Format collective. With a career in DJing established and already a past as a musician, she decided to focus herself on production to be able to play her own tracks at club nights, tracks in which she often uses her voice to entrance the listener.

With her debut release on Coincidence Records in 2018, AADJA will go on to put out a few more projects before scoring an acclaimed 6 track record on Nina Kraviz’s Trip Recordings. ‘Thought Dealer’ hit the scene just last year in 2021, proposing a very relevant collection of tracks high in tempo and in tension. In there, you can hear quite a few worlds - the closer ‘Still Wired’ takes the listener on a nostalgic 160+ bpm acid trance highway, while tracks like ‘Hypomania’ balance it out with a more groovy and tunneling techno that include her own hypnotic vocals and wide filter sweeps and 16th stabs.

Her career in DJing could only gain traction after a release like that, making her Boiler Room debut in Toronto last year and her 1st Possession in Paris this year in February. With a few more tricks up her sleeve for the coming year, 2022 is looking like her best one yet.

So you’re originally from Newfoundland on the eastern coast of Canada and later moved to Toronto, is that correct? For what reasons did you move and what was the scene like when you arrived?

Yes I was born in St. John’s and grew up in Conception Bay South. I decided to move to Toronto because I thought it would be a really good place to improve as a musician. In the beginning the scene was quite different than it is now ... Toronto has always been known for being a tech house city and, to tell you the truth, I never really fit in with that crowd.

After a 2 year long hiatus from DJing, I somehow ended up promoting an event with Dax J & Truncate for a friend of a friend. I had no clue what was coming next but shortly after I would land my residency at Format - a collective that known for DIY warehouse raves. They invited me to play my first opening set for an international artist in 2017 and that was with Mike Parker. It was really exciting for me! Although at the time, if we got say 50 or 100 people to attend, that was a pretty good turnout for us. The techno scene has absolutely exploded here since then.

After having already been a DJ for some time, you started your career in production with a release on Coincidence records in 2018. What did your journey in production look like up until that first release and where are you at now?

One of the reasons I decided to take a break from DJing is because I was really craving to create my own music. As a musician it felt extremely unfulfilling to play records made only by other producers. During this time in my life I was writing songs on my guitar and going to open mic nights. After that, I met up with some electronic music producers and started working on several collaborations. It was a good experience for me but what I really needed was to have more creative control in the studio and so that’s when I began my production journey and doing everything by myself in terms of producing and arranging my own music.

Your sound strikes a balance between bold techno rhythms and trance/acid riffs. Who inspired you to put out records that sound like this and who do you listen to now?

What initially influenced my productions in a big way was definitely my love for old trance and techno records. Although that love remains the same, I've now truly discovered my own sound and I actively try not to allow myself to be so influenced by other producers. I came up with the concept for ‘Thought Dealer’ when I was reading about the iconic abstract artist Helma af Klimt. Sometimes the best ideas are formed when I find inspiration in other places.

Where does the name AADJA come from?

I actually have to give credit to one of my oldest and dearest friends on this. To be honest, I was having trouble coming up with an original name, that fit my sound, so he was like “Here. Take this book and find some inspiration”. I flipped through the pages and within about 15 seconds I said ‘’There, that’s it. AADJA!”

Although, nobody can really pronounce it properly so it’s kind of hilarious.

You recently made your Boiler Room debut in your home base Toronto. What was that like and how is it different from a regular gig?

Honestly, it was one of the most exhilarating yet terrifying things I have done in my life. Kind of like jumping out of a plane. I basically went from playing in dark, yet familiar warehouses to a well lit stage with multiple cameras in my face. It definitely added a lot of pressure for me, but once you get up there and feel the intense energy from the crowd, you forget that the whole world is watching.

Having played in many venues and cities all over, you must have a few favorite spots to play. Which places have a special place in your heart and why?

It’s hard picking favorites because I have had the pleasure of playing in a lot of different, incredible venues and places...

For starters, Berlin was the first place I ever played within Europe, and so it’s always gonna be nostalgic for me. I recently made my debut in France at Possession this year. It was a mind blowing experience playing in a massive warehouse in front of 5000 roaring people.

The underground scene at Macadam in Nantes was also a 10/10 experience. It’s like a totally different world, and truly one of the most magical places I’ve ever been. I also really loved playing at Mondo Disko, which is a totally legendary club and the energy from the crowd is like no other.

Copenhagen is another favorite of mine. It’s been a while since I’ve been there but I’ll never forget playing at Endurance a few years back.

You made a big impression with your release on Nina Kraviz’s trip recordings. How did you come into contact with her and do you plan on furthering this working relationship?

I had the chance to open for Nina in Toronto just before the pandemic. It was a very meaningful night for me. Not long after that, I contributed to the first two ‘Hot Steel’ compilations and we started planning my debut solo release on трип. I think we'll always have a very strong musical connection and this is something I would really love to continue further into the future.

What’s coming up next for you?

I am doing another European tour for 2 and a half months this summer. There’s been conversations about South America and Asia as well. Also making my debut in New York this fall, which is something I’ve been always looking forward to. Other than that, I’m planning my next few releases so I’m hoping to share some more news about that soon!