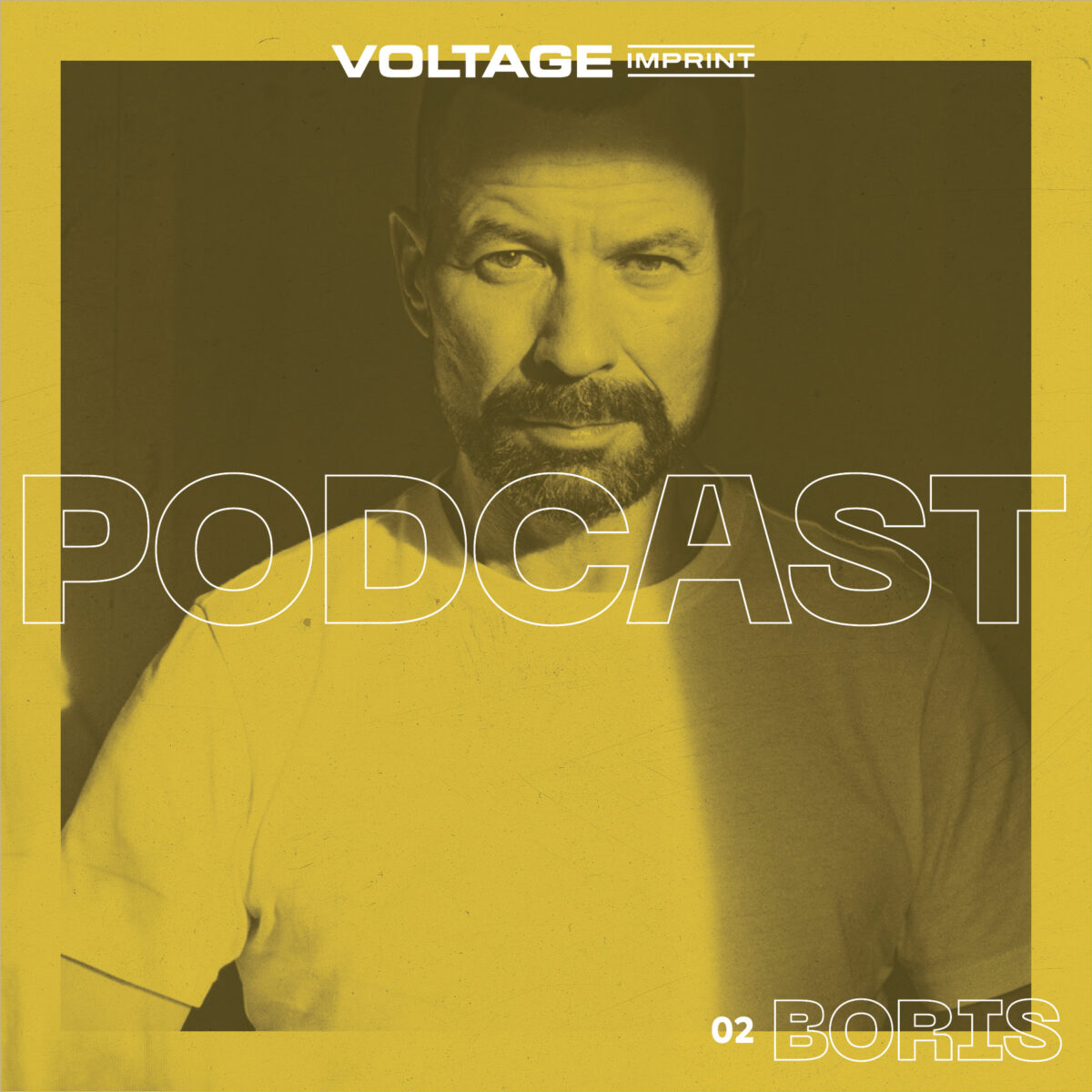 A true DJ to the core, music fanatic, Berliner, and clubber; Boris’s 20 year career has seen the evolution of dance music of all kinds, and parties all around the world and his eclectic style reflects just that.

Born in Berlin, Boris later moved to New York for four years of musical inspiration thanks to Larry Levan’s residency at Paradise Garage - the legendary SoHo club that closed in 1987. With close connections to Berghain and Panorama Bar dating back to the old Ostgut location in 2000, Boris truly embodies his hometown’s fascination for the perpetual evolution of dance music.

Can you give us a quick background of your life? Where you’re from, how music followed you, and where you’re at now?

I was born in Berlin. I lived pretty much the biggest chunk of my life here, and I also lived in New York for a while. Yeah, I’ve been a DJ for over 20 years now. From a very young age, I’ve been influenced by soul, rock n’ roll, disco, some German music, new wave, punk, industrial music. Anything that was going on in those years really, 70’s and 80’s, and then house and techno in the 90’s and 2000’s.

I’ve always been collecting music, listening to a lot of music and I went out a lot. I guess I got my schooling through clubs that I used to go to. I like any kind of music, well not any kind of music, but I’m very open to whatever I’ve never heard before. With what’s totally off the wall or even with what’s not from this cultural hemisphere.

As an experienced and eclectic DJ/producer, how do you see the evolution of dance music and how do you adapt?

I’m always searching for new sounds, new rhythms, and new artists. I’m interested in what is out there - what is new - digging for new music that’s what keeps me going. As much as music generates emotions and memories, it also generates a lot of energy. I think music is going to become more and more energetic in the future.

We see that techno has gone from very energetic in the 90’s to more minimal in the 2000’s, to generalize a bit. Now we seem to be going back to a more energetic style.. Do you think we’ll eventually go back to something more minimal or discrete?

No, I don’t think so. I mean, it might fragment into many other new styles. Because production techniques have evolved also. There’s a certain evolution in music. If you think of Detroit Techno then, it’s something totally different from what we think of Techno nowadays and it’s still called Techno. But I think we’ll just spiral into more and more advanced listening experiences and totally new fucked up rhythms, probably. It might be cacophonic, who knows?

But you still think it’s going to be highly energetic. Is there a reason for that?

Well I think that people live more energetic lives than they used to. You have all this input of information that you can’t even process anymore. It just gets more and more. People need to let go of all that energy and information overload somehow.

Do you still go out to clubs to dance and not just DJ?

Well I guess not now, really! [laughs] Well, I was pretty actively touring. Once you play every weekend and you’re traveling to a lot of places, you don’t have much time to have a chill club night - even with your friends. Because you’re just totally on the go for 10 years. But I still go, how shall I say, to my favorite club on a Sunday night when I come back from touring. Have a beer at my favorite spot at the bar..

You’re known for your close relationship to Ostgut / Berghain, having played the old location and the new - a sort of home for you. How did this relationship come together?

Well, it was actually by chance. A friend of mine recommended me to the owners and they booked me to play Snax at Ostgut in September, 2000. They liked it and they asked me if I wanted to become a resident there since they were opening up a new floor, which would be called Panorama Bar in 2001. That’s how I became a resident there. Since then, it has been a very fruitful relationship for me and, I think, for them as well.

There was time between Ostgut’s closure and Berghain’s opening.. What was that period like for you and for Berlin in general?

Berghain opened a year and nine months after Ostgut had closed. During that time, there wasn’t much traveling very far, it was mostly happening in Europe. Here [Berlin], it was still kind of an island, you know? A lot of underground parties were happening at that time. But, again, after Ostgut closed, there was a lot of interest in me playing different parties and different clubs all over Europe.

What clubs in Berlin come to mind when you think of this period?

There are a few I can think of but I forgot their names... I mean, there were parties, warehouse parties, I played. I went a few times to Tresor, but I was never a big fan really. And yeah, then Berghain opened and I didn’t need to go anywhere else anymore, because that was it.

Tell us about your relationship with production. With a few tracks on Ostgut Ton, a few on Careless Records years ago, is production something that you do / interests you or is it something that’s on and off?

I’m not really a producer. I like playing music - playing in a club. Making music is not on the top of my list. I do try a few things and spend a little bit of time putting down some ideas, but it’s not on the forefront of what I want to do. I'm a DJ foremost. The thing is I don’t have the need to produce like some of the new up and coming artists, who probably feel more compelled to produce in order to get noticed.

Does Ostgut, for example, commision records from you for certain projects and compilations that you then make, or do you work on music regularly enough to send out something you’ve already been working on?

They do ask me for stuff. There were the anniversary compilations for five and ten years of the label and all the resident DJ’s were asked and I wanted to be part of it.

Do you still play those records?

No, but other people do, actually! I’m quite surprised I still get the thumbs-up for the first one, REM, from the five years compilation. There are some people who like that record and I like it myself, but it’s very, how should I say… ‘understated.'

Any non-electronic records that you’ve been particularly attached to as of late? Where do you find your music?

Mostly what I’m listening to is a radio station called Intergalactic FM. It's a streaming platform online and there are three channels you can choose from what you want to hear. I support them because I like what they’re doing and the work they put into it. I don’t have Spotify, I don’t have Apple Music, I don’t do any of that. Although the artists don’t get any money from being played, I do buy music sometimes that I´ve heard on that station. So Intergalactic FM has been quite an inspiration for me by featuring music I would never get to hear anywhere else. I do read the newsletters from several record shops and listen to all the promos I get every week. I probably listen to two to three hundred tracks a week where I sift out the one percent I like. As a DJ, you have to stay relevant; that’s part of my job and I’m interested in music, so I want to hear new music. But I have no actual inspiration ‘source’. Why should I put on Spotify to have an algorithm proposing music to me? Just something that sounds like something I would like, which is stupid. I used to work in a record shop and there you want somebody who curates music for you actually. Someone who says ‘You’ve been buying this’ or ‘I know how you are, you might like this or check out that.’ You just have to find your sources and keep digging.

We can imagine things must have felt different with the current situation. Have you had more time on your hands than before? And if so, how did you spend it?

I’m taking care of my mother, who’s pretty old. She’s happy that she sees me more often than when I was touring. So I’m happy to keep her company once or twice a week which is great. Also hanging out with a friend or two sometimes if they live together. I try to stay fit, I go to the park when it’s not raining or snowing; just running and doing sports. That’s about it. More music, more Netflix...

Any future collaborations or releases you’re looking forward to?

The label (Ostgut Ton) wanted to put out a new anniversary compilation last year but it has been pushed back and might happen at the end of this year when the club reopens, if it reopens this year. I’m planning to do a track for that, in collaboration with somebody.